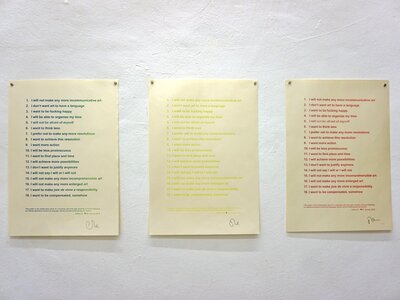 Languages In Danger/ous Languages is part of an ongoing investigation that looks at ‘integration’ via language instruction and the relationship between identity and collective consciousness in three contexts (Sweden, Spain, France). The pieces here move from literary references to interviews, from models to text-based graphic works in order to contribute to a discussion on how we approach and communicate with one another and what we expect in terms of fitting into greater systems. The works speak (of) three different languages and are materialised as photographs, drawings, video and prints, sharing reflections on the relationship between language, power and identity.

The silkscreened posters are the collaborative result of a workshop with third year students of Escola Massana, organised by Homesession, Barcelona. Using English – a language that is not their own –, the students reflected and made resolutions concerning language, identity and the global contemporary art system.

The video is a fragment from a work in progress supported by a grant from La Escocesa centre of artistic production and investigation and with the assistance of the Consorsi per a la Normalització Lingüística.